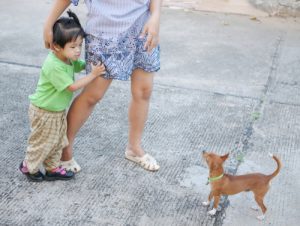 If your child has developed a fear or phobia of something specific, whether it’s the water, the dark, or an animal such as dogs, there is generally a point at which that phobia began. Perhaps he had a scary encounter with an overly enthusiastic dog, or the water stung his eyes when he was splashed at the local pool. These types of experiences can evolve into persistent phobias that deprive children of a fair amount of joy: the joy of splashing in the water with friends, receiving kisses from a doggie friend, or even the joy of feeling same in one’s own bed at night.

The trickiest aspect of overcoming phobias is often the avoidance that comes along with them. When a child has a phobia, intense feelings accompany their fear. The body’s fight or flight response produces symptoms such as a racing heart, an aching stomach, and shortness of breath, which can be even more scary than the thing the child is afraid of. A child who is afraid of dogs may begin to avoid them simply because he is avoiding the symptoms that accompany his phobia. This avoidance prevents children from learning that the thing that is worrying them is actually not so scary after all. Confronting one’s fears is actually the key to squelching these phobias.

The first step to helping with avoidance is to give your child as much information as possible. If your child is afraid of dogs, talk about why dogs bark and why they jump. You can teach your child that what seems scary is often just social behavior and will result in nothing more than a little light contact or a loud sound. If your child is a bit older, you might even want to talk about statistics regarding dog aggression so that your child can see that most dogs are friendly and not prone to aggression.

Once you’ve talked about the source of your child’s phobia and have given him information that makes him feel safer, you can begin a stepladder approach to confronting the source of his phobia. If your child is afraid of dogs, start by bringing him to a friend’s house where there is a dog, and asking that friend to keep the dog in another room. Tell your child that he can listen to the dog and look at the dog, but don’t insist that he go near the dog. The goal, with each step of the ladder, is to help your child to feel less fear at each stage and become totally accustomed to the situation. Once your child feels less fear and is almost unaware of the dog’s barking or the dog’s presence, you can leave the situation. The next step will be bringing your child back and keeping him in the same room as the dog, but asking that the dog’s owner hold the dog so that there won’t be contact between the child and the dog. Once your child is comfortable with that, you may leave. The next step might be allowing your child and the dog to interact. Even if your child is scared, stay with him and show him that each bark, each sniff, and each pet is resulting in no harm whatsoever. Once your child begins to feel comfortable, the bodily sensations that accompany his phobia will subside, and he’ll feel more comfortable encountering dogs in the future.

Phobias can be difficult to tackle in young children, and it can be easy to simply avoid the phobia triggers altogether in order to keep your child calm and feeling safe. Confronting these phobias using this stepwise approach will help your child build resilience and confidence and will allow him to not miss out on some life experiences he may wind up enjoying!