Parents of young children often wonder what constitutes typical behavior as their children grow and develop. Play is an area which confuses many parents. Why does your baby ignore other kids? When will my toddler begin to make friends? Children go through four stages of play in their young lives, and it’s very normal to see that your young child may prefer to play by herself, oblivious to the kids around her, while your preschooler may all of a sudden come home talking about his new friends. 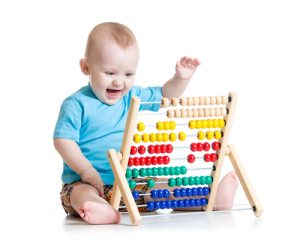 From birth until age two, children engage in the first stage of play, which is called Solitary Play. Children at this stage enjoy playing on their own, exploring the new objects around them using their five senses. They may chew on toys, bang them against the ground to see what kind of sound they make, and will eventually learn to stack their blocks and press buttons and sort shapes. Interest in playing with other children is largely absent during this time. This is a time for your little one to explore on her own.

Parallel Play becomes apparent when children turn two years of age. This is a subtle change from their years of solitary play, but an interesting one. At this stage, children still prefer to play alone, but may sit alongside other kids at daycare, watching and listening as other children play and read and talk. While they may not interact, they are picking up on social cues, learning language from one another, and noticing different ways of playing.

As children near the age of three, they reach the stage of play known as Associative Play. At this stage, your child may still enjoy playing on his own, but he’ll likely begin to play alongside other children at preschool or at the playground, noticing what the other children do, and copying the behavior they see. A child may watch another child put a hand puppet on, and then don a hand puppet himself. Kids may also begin to chat while they play, asking to borrow toys, or asking other children to explain what they’re doing. They may have conversations while they are playing, asking to borrow toys or commenting on what another child is doing. 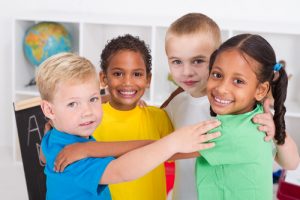 The fourth stage of play, known as Cooperative Play, is a huge leap for your child, socially. Your preschool age child may come home from school, talking about another child in his class, and what they did together that day. This is when your child begins to make friends. Kids this age are learning to communicate about what they’d like to do as a team, what they could build together, or even engage in pretend, or imaginative play together. This is an age when many kids discover the joys of friendship, but remember to talk to the teachers at your preschool if you suspect that one of your child’s friends may be upsetting your child. At this age, kids are still learning to be respectful, and many kids may need a little help learning how to manage their new friendships.

Remember that every child moves at their own pace. Your child may enjoy playing in a solitary fashion for years to come, and that may just be a sign of independence. Other kids will become friendly quite early on. Enjoy watching your child play and have fun, no matter what stage they are in.