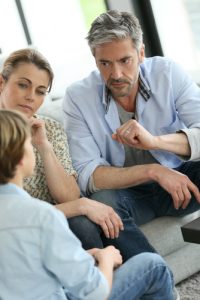 There’s no doubt that the media has been saturated lately with domestic and international terrorism, gun violence, war, famine, and political clashes. Many of your young children won’t absorb any of this news until they are older, but some of them may catch a stray image on television, or might overhear adults talking about the news. Talking about current events with your child can be difficult at this age,  but you can try to de-escalate their concerns while giving very basic information.

Let them bring it up first. The best time to begin discussing difficult events in the media with your children is when they’re old enough to have perspective on how big the world is, how far away or unlikely danger might be, or how nuanced a situation can be. This begins to happen between the ages of 8 and 10. Young children will have a harder time putting important information into perspective, so don’t mention the events you see on the news unless they pick it up from an older friend or sibling and ask you first.

Ask them questions. Before you begin to talk about the situation with them, ask them what they already know, and how they feel about it. If you assume that they’re afraid, you may inadvertently cause fear where there was simply curiosity. If they have only seen an image on TV or have heard an unfamiliar word, you may want to give them a more understated version of the story.

Keep things simple. While you don’t want to lie to your children, you don’t want a preschool age child to begin thinking too deeply about terrorism, war, famine, or loss. You can explain that there are bad things that happen in this world, but they are not commonplace, and they will most likely never happen close to home. While this is a simplification of reality, it will answer their questions without making them feel endangered.

Have your children seen any of the images or heard anyone discuss violence on TV? How were you able to make sense of these issues? Let us know in the comments section.