It’s the moment most parents dread. You’re in the grocery store. You have a shopping cart full of items. You’re in the middle of a long line for the cash register, and it’s not moving quickly. That’s when your child, who has been on the verge of unraveling for the past twenty minutes, boils over. It’s a temper tantrum, complete with crying, hyperventilating, shrieking, and a fair amount of toy-throwing and foot stomping. Everyone in the store is looking your way, and you’re wondering how to make it stop, and how to prevent it from happening in the future. And despite the screaming and the frustration, you also feel sympathetic for your child. What has made her so upset? 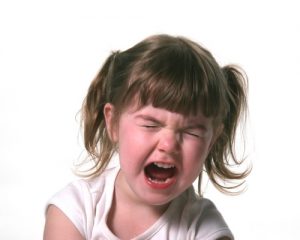 Temper tantrums occur for a variety of reasons. They generally happen to most children between the ages of 1 and 3, since that’s when children begin to desire more control over their environment and more agency in the world, but often don’t have the language skills or the independence to get what they want. They may have trouble talking to you, or to their childcare provider, about what they need. If your toddler wants a toy that is at the bottom of your bag, but can’t quite verbalize which toy it is or where it is, he may demand simply “the fuzzy toy” over and over. Since he lacks the ability to describe the toy further, to go into your bag and find it, or to tell you where it is, he may become frustrated. And since he does not yet have the ability to have a conversation about his feelings, they will simply spill over in the form of a tantrum. Once you understand the root cause of a tantrum, it actually doesn’t seem so mysterious. In fact, tantrums are perfectly normal for kids this age.

There are a few things you can do to prevent temper tantrums from occurring in the first place. Since many temper tantrums happen because the child feels a lack of control, try to give your child a certain level of control, or choice, in her day. Instead of giving her breakfast without asking what she wants, or asking an open-ended question, give her a choice. Does she want oatmeal with blueberries this morning, or does she want Cheerios with banana? Being able to choose the option she likes will make her feel as if she has control over her environment. You can also spot a child’s frustration rising, and create a distraction. If your toddler wants a toy that isn’t available, give him something else to focus on, like a fun activity, a healthy snack, or a change of scenery. Pay close attention to your child’s limits. Is your child rested? Fed? Has she had enough stimulation for the day? Is she overstimulated? A child who needs sleep, a snack, or some quiet time is more likely to have a tantrum.

Of course, it’s not always possible to prevent tantrums before they occur. Your child will have them from time to time, and it is important for you to stay calm, even when you’re exhausted and frustrated on the inside. Follow a step-wise approach to the tantrum, instead of becoming overwhelmed. First, try to figure out the cause of the tantrum. Does your child want you to give them a toy, remove an article of their clothing, or answer a simple question? If so, you may be able to solve your child’s problem and stop the tantrum in its tracks. If the root of the problem lies in an issue that cannot be fixed, such as an off-limits toy or an unreasonable request, you may not be able to stop the tantrum immediately. Similarly, if you simply can’t determine the cause, the tantrum may just need to run its course. In these cases, do not respond to the tantrum with negative attention such as yelling or scolding. This negative attention will actually act as a reward.  Negative attention, to a toddler, is better than no attention at all. Simply tell your child that you understand that he is frustrated, and let him know that you will be happy to talk with him about it once he has calmed down. Allow the tantrum to run its course. If you are at home, seat your child in a quiet spot. If you are out and about, get your child to a quiet place where 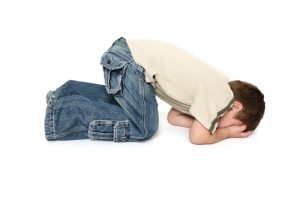 he will not be overstimulated. Once the tantrum is over, reward your child’s calm behavior by giving him a snuggle and talking about how he might more easily communicate his needs in the future. Tell him that tantrums won’t help him to get what he wants, and encourage him to try to stay calm when he is frustrated, and communicate with you as well as he is able.

And of course, remember that this is a phase for most children. By school-age, kids are speaking fluently, and are more easily able to communicate their needs to you and to their childcare providers, daycare staff, or teachers. Plus, once they get a little older, they are able to more easily navigate the world, locating objects they want or removing themselves from situations that are unsettling to them. When you remember that tantrums themselves are temporary, and the phase itself will pass, your frustration will ease considerably.