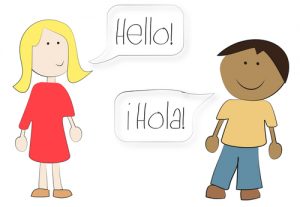 There are a multitude of reasons to learn a second language. Fluency in multiple languages promotes tolerance and cultural sensitivity, allows for an easier travel experience, and builds bridges between native speakers of differing languages. Recent research shows that young children can benefit greatly from learning multiple languages, specifically in the area of cognitive development.

Research provides us with a great deal of evidence which shows that people who are fluent in more than one language function differently on a cognitive level than people who are monolingual. Bilingual people are able to multitask and focus their attention better, and brain scans show a greater amount of gray matter present in the brains of bilingual people, specifically in the areas of the brain which are responsible for executive function. Experts believe that possessing the ability to choose from different languages depending on the situation allows bilingual people to engage in a form of exercise for their brains which improves brain function in these key areas. Children who are learning to speak more than one language must learn to do this type of “exercise” at a key stage of their development.

In fact, younger people, from infancy through teenage years, show evidence of these differences in cognitive abilities. Babies who routinely hear different languages spoken, whether at home or at childcare, demonstrate differences in their cognitive patterns when compared to babies who are raised in monolingual environments. Research also shows that high school students consistently perform better on the SAT-verbal and ACT tests when they have previously studied a foreign language. The rise in their test scores even correlates with the length of time they have studied a foreign language.

Mythology surrounding the practice of bilingual speech at a young age persisted until recently. In the past, it was a common misconception that children who learned two or more different languages as a child would become confused and unable to speak any of the languages with proficiency. This myth has been disproven, as research shows that children who are learning a second language actually speak and comprehend in their first language better than monolingual kids. They even begin to read at an earlier age.

All of this research lends credence to the idea that supporting children who are learning multiple languages at home, and promoting the practice of learning a second language even at a very young age, can truly benefit young children cognitively, and enhance their education in general.